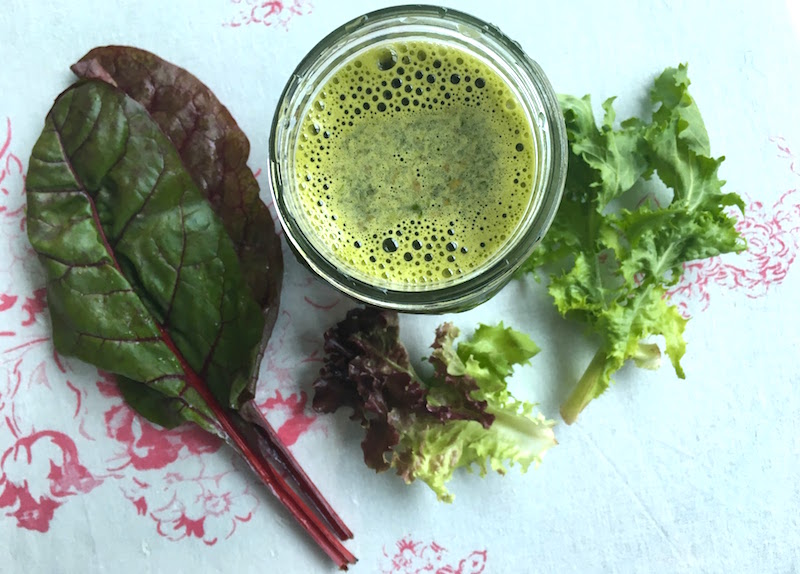 Let’s get one thing out of the way. If you’re juicing Swiss chard, you are in the upper echelons of green juicers. As in, you’re one of the clever folk who have realized that this lovely green is as great in a green juice as it is in a salad.

Admittedly, Swiss chard juice does not sound like the yummiest of juices, especially when it’s up against sweet contenders like pineapple juice or pear juice. But this is one leafy green that’s totally worth juicing. And with some clever combinations, Swiss chard juice can taste every bit as great as the sweeter concoctions.

But then again, I’m a little biased. You see, I am head over heels in love with Swiss chard. I’ll admit – at first, it was all about the looks. This leafy green is stunning. Bright, beautiful, crinkly green-ness with scarlet veins running along its leaves in artistic etches and a vivid red stem to boot.

And once you get to know about its unique health benefits – there’s just no going back. Did you know that Swiss chard is known to contain over a dozen different free-radical-fighting, cell-protecting polyphenol anti-oxidants?

Or that the brilliant red color comes from a precious phytonutrient called betalains which have anti-inflammatory and detoxifying effects on our bodies? Or that these delicate leafy greens are crazy rich in vitamins – with just 100 grams of this stuff containing 1038% of your daily requirement of vitamin K?

But I’ll be the first to admit that when you go past its looks – and actually eat it – Swiss chard can come on a bit strong. Like most nutritional powerhouse greens, chard has a kick to it. It’s a bit peppery, a bit bitter, and quite earthy, which could be a perk if you’re into that sort of thing.

But even if you’re not – yet – you should definitely give Swiss chard a chance. Why? Because it’s chock full of goodness, like…

Did you know that Swiss chard has been around for over 6,000 years? Talk about an ancient green. And it’s earned its stripes in more ways than one – Aristotle, the Greek philosopher we were all forced to study in school, like this leafy green so much that he penned a collection of odes dedicated to the chard in the 4th century BC.

Who can blame him. After all, this red-streaked leafy green is like the lovechild between two of our favorite juicing ingredients: leafy greens and beets. In fact, Swiss chard is related to both of those!

Swiss chard is a very rich source of various essential vitamins and antioxidants that take the body’s hardiness against diseases up a notch by significantly reducing oxidative damage and stress. These include vitamin A, vitamin E, vitamin C, kaempferol, quercetin and zeaxanthin, and a whole lot more.

Good for the bones

Swiss chard is loaded with vitamin K that plays a key role in sustaining the overall resistance of bones against breakage and diseases like osteoporosis and osteopenia. Remarkably, frequent consumption of vitamin K also promotes the production of osteocalcin, a type of non-collagen that inhibits the accumulation of harmful toxins and bacteria that break down bone cells.

Like all green things, Swiss chard provides an ample dose of chlorophyll, aka plant blood. This green stuff is so awesome ’cause it has an alkalizing effect on the body, has anti-carcinogenic effects, and helps to gently detoxify our bodies of toxins and heavy metals.

Swiss chard s a good source of B vitamins  like pantothenic acid, thiamin, pyridoxine, niacin and folate that are found to activate receptors in the body that improve the metabolism. These vitamins are concentrated in the phytonutrients called epoxyxanthophylls and betalains in the chard’s leaf veins and stalks.

One of the best foods for diabetes

Swiss chard is a diabetic’s best friend, thanks to its abundance of a phytonutrient called syringic acid that inhibits the enzyme alpha-glucosidase. When this enzyme is left uncontrolled in the body, the breaking down of simple sugars in the system gets disrupted and spikes blood glucose levels, raising the risk for diabetes.

Plus, a study even found that treatment with chard extract was able to reverse the effects of diabetes on blood glucose as well as protect against cell damage.

Even cooler? Swiss chard has unique protective properties that are particularly beneficial for diabetes. For example, it was shown to be helpful in aiding the regeneration of pancreatic beta cells, which are crucial for diabetics since these cells are responsible for the production of insulin. It’s currently thought that Swiss chard helps to control insulin by helping pancreatic beta cells regenerate.

And this is one awesome antioxidant – not only has it have shown to help fight cancer, heart disease, diabetes, and inflammation in the body, but it’s also great for your digestive system, helping to support detoxification as well as acting as an anti-inflammatory within the gut.

Which attributes to the fact that chard is one of the most nutrient-dense leafy greens you can add to your juice recipes – but be warned – it might come on a bit strong if you’re just starting out. Chard leaves have a distinct earthy flavor with a kick to them. That little peppery-bittery edge gets addicting after awhile, but it does take some getting used to.

So at first you might want to blend it with ‘weaker’ greens like bok choy or spinach to help balance the taste as well as with sweet fruits and veggies like beets, carrots, apples and pears. Here’s a few Swiss chard juice recipe ideas to get you started!

If you’re a big fan of the Mean Green juice by Reboot with Joe, here’s a variation that’s just as easy to make and full of health perks:

It’s a great green juice for both beginners and advanced juicers alike, with the cucumber and apple doing their part to water down and sweeten the earthy tones of the chard.

Here’s one of the most refreshing green juice recipes you’ll ever try:

The water-y lettuce helps tone down the chard by a lot while the pears add a lovely sweetness. And thanks to the mint, this makes the perfect juice recipe for relaxation. Not to mention that lettuce is known to have sleep-inducing benefits – so sip on this at the end of a long day!

Here’s a heart-healthy juice recipe that’s both creative and delicious:

It goes without saying that you should opt for the tiny little radishes – otherwise, the juice recipe is going to be strong. And if you want, feel free to add a few less radishes and add in some sweeteners like a couple of grapes.

What better way to balance the earthiness of Swiss chard than with the sweetness of honeydew? Here’s what you’ll need:

Even with the wheatgrass, this juice recipe definitely has a green goodness to it. We love the balance of cilantro, chard and honeydew in this recipe – all of which balance out really nicely to make a wonderfully cleansing, hydrating and antioxidant-rich juice recipe.

Here’s a delicious Swiss chard juice recipe to get a huge dose of vitamins and get your circulation going:

It’s so simple and so rich in Vitamin A and C as well as a huge range of protective antioxidants!